A lovely original grey and green CV template with a real focus on skills and lots of nice features. There's space at the top for a photo although this can quite easily be rejigged if you'd rather not put a picture on your CV. Download the fonts before you start editing. 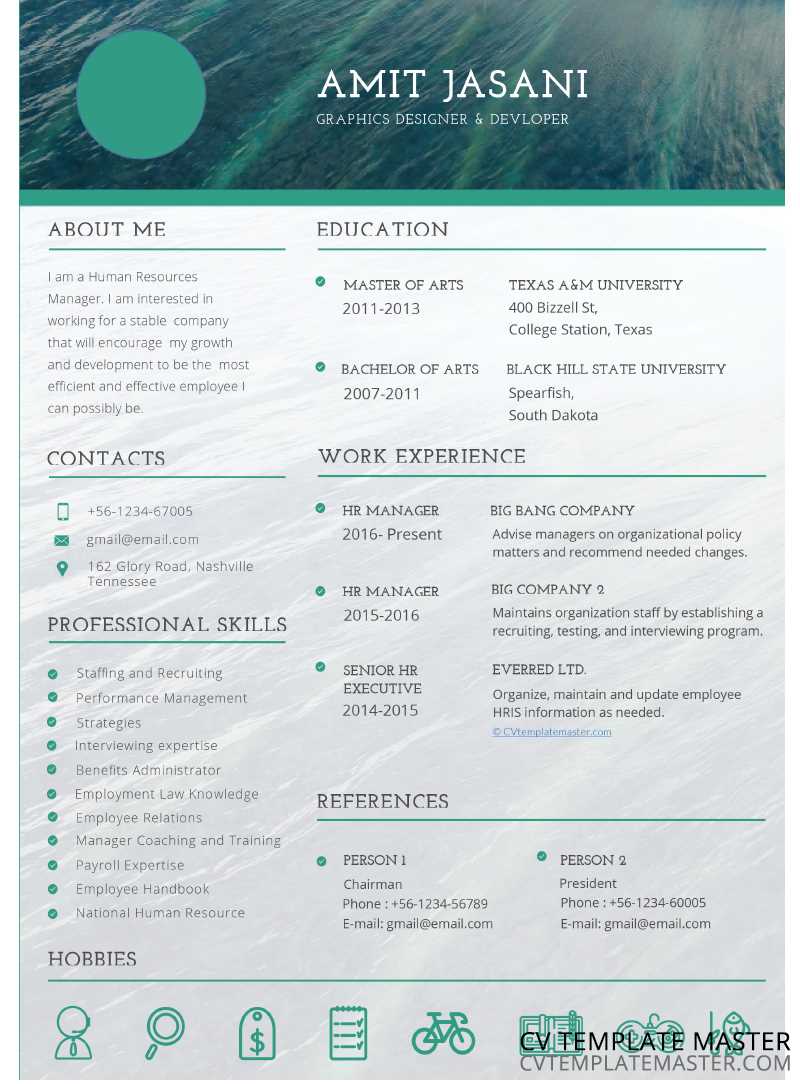 About this CV template:

There's quite a lot going on with this CV template, but it's super easy to customise. Click on an area of the background to delete it if you'd like a cleaner, whiter and fresher design - but we recommend you change the colour of the heading text first, or you'll find it more difficult once the background has gone.

Click here to view a preview of this CV template (PDF)

How to utilise promotions on your CV

Gaining a promotion in the past is something to be proud of. It will of course be documented on your CV so that a future employer can see your achievements. But are you making the most of that promotion on your CV, or are you hiding it in the background?

Not everybody gets a promotion, and that could be for a number of reasons. Maybe that employee has no interest in a step up. Or maybe they are not quite up to the task. In any case, the importance of gaining a promotion and how that can be used on a CV is priceless.

How to showcase a promotion on your CV

The mistake that most people make is to list the promotion within the tasks and responsibilities, without giving any more information. If the hiring manager can see that you were promoted – that’s great! But the question that needs answering is – why were you promoted in the first place?

Gaining a promotion should be something that’s highlighted on your CV, and should never be lost within other text. This special moment needs to be shared and have its own space on your application where it can be admired.

Explain why you were promoted

The hiring manager will be impressed that you’ve been promoted in the past. Having a clear and natural career progression is important to any employer and shows dedication. The most important thing to do is explain why you were promoted. Here is what you should be looking to answer when writing your CV:

Once you’ve narrowed down your reasons for the promotion, you can consider how you’re going to write this on your CV. Here’s an example to help demonstrate how this can be done:

‘Having gained 3 years experience in customer service, I actively began to help my manager train other team members and took on a supervisory role before being promoted’

In the example above you can see that experience and knowledge were two important factors in the decision to be promoted. In addition, your leadership and training skills were put to the test and clearly passed with flying colours.

First of all you need to ensure your CV isn’t littered with irrelevant information. Curriculum Vitae is Latin for ‘the course of your life’, and doesn’t mean you have to provide a life story. Some of your past roles and skills acquired may not match the new role, so keep that information down to a minimum.

Freeing up space on your two page CV should now allow you to focus upon what realty matters. A promotion is a big deal, and should be explained in more detail. The great thing about a promotion is that it also doesn’t have to be relevant to the employer. Any kind of outstanding achievement should be showcased on a CV.

Don’t be afraid to go into more depth about exactly why you gained that promotion. If you are a little blasé about the whole thing, the hiring manager might take that stance also. But if you worked very hard for many years to get that promotion, you should make that known on your CV.