This attractive Footballer CV template contains helpful example information to inspire you, with a clean ATS-friendly layout that uses a stylish Microsoft Word theme and palette. 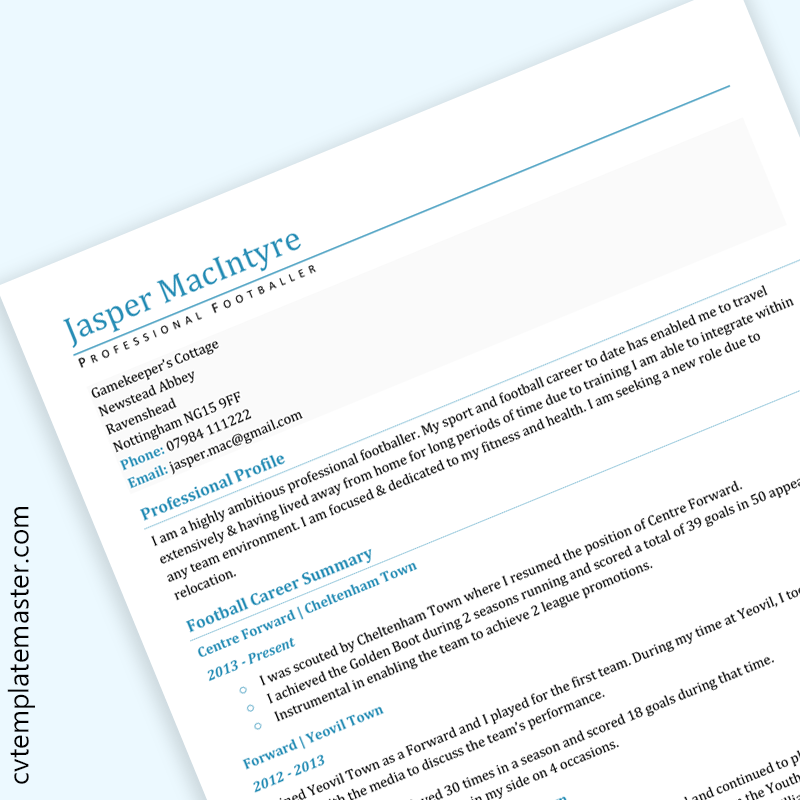 User rating:
Football CV template
3.0 rating based on 12,345 ratings
Overall rating: 3 out of 5 based on 4 reviews.
Anonymous

About this CV template:

Using a simple layout with blue headings, shading for your personal details, matching bulleted lists and the Cambria font, this football CV template is well presented and easy-to-read. This CV can easily be adapted to a very wide range of roles.

Click here to view a preview of this CV template (PDF)

Text preview of this CV template:

This is a text-only preview - download the formatted Word file using the link above.

I am a highly ambitious professional footballer. My sport and football career to date has enabled me to travel extensively & having lived away from home for long periods of time due to training I am able to integrate within any team environment. I am focused & dedicated to my fitness and health. I am seeking a new role due to relocation.

I joined Yeovil Town as a Forward and I played for the first team. During my time at Yeovil, I took the lead for meeting with the media to discuss the team’s performance.

I joined Swindon Town at the age of 10 on their Under 10s Squad and continued to play for them until the age of 18, after which I was offered an Apprenticeship, where I progressed from the Youth Academy Team and later played for the reserves. I thoroughly enjoyed my time with Swindon town; a brilliant club that allowed me to flourish as a player and afforded me so many great training and match opportunities across the UK and abroad.

I achieved a number of FA Grassroots football awards during my time with Swindon including the Rising Star of the Year Award in 2006; awarded to individuals who contribute significantly towards football in the community, who acts with responsibility and encourages and supports others.

I was also awarded the Bobby Moore Award in 2008 for my commitment to the club and the wider community. I was especially noted by the judging panel for my positivity during training sessions and during a particularly difficult season.

I was approached by a talent scout when I was aged 18 and just coming towards the end of my Level 3 Sports Diploma. My Apprenticeship included the following key areas:

The PFA (The Professional Footballer’s Association)

Football has been my passion as soon as my father showed me how to kick a football in the local park. I come from a family of professional footballers; my dad and uncle both played for Oxford United and my twin brother also played for Swindon Town.

Alongside my football and during my time at Swindon, I have also dedicated my time to representing the club in the community and I completed a lot of voluntary work; including designing and delivering PE sessions to the local primary school and leading fundraising activities for the local animal shelter and hospice; of which Swindon Town were ambassadors. 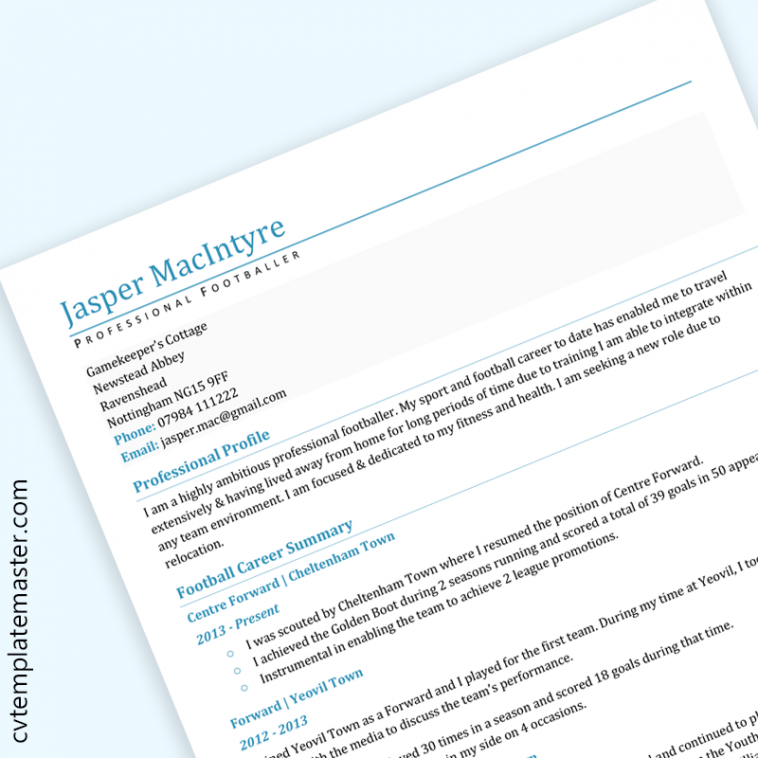 Here’s page one of this football CV template: 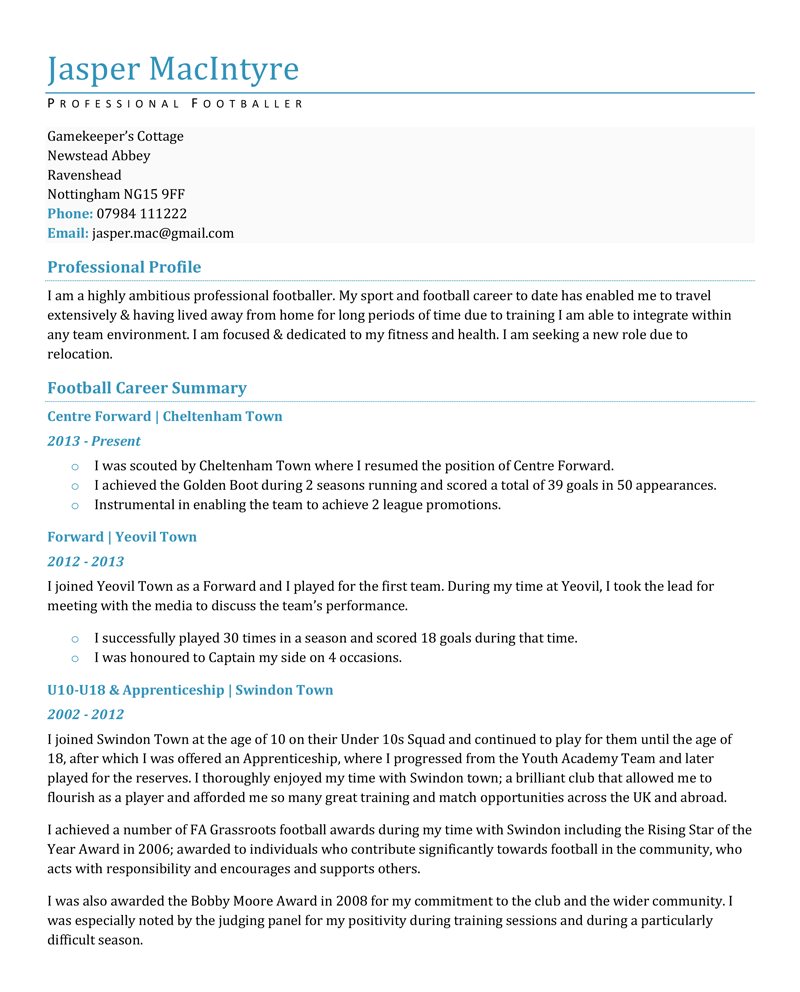 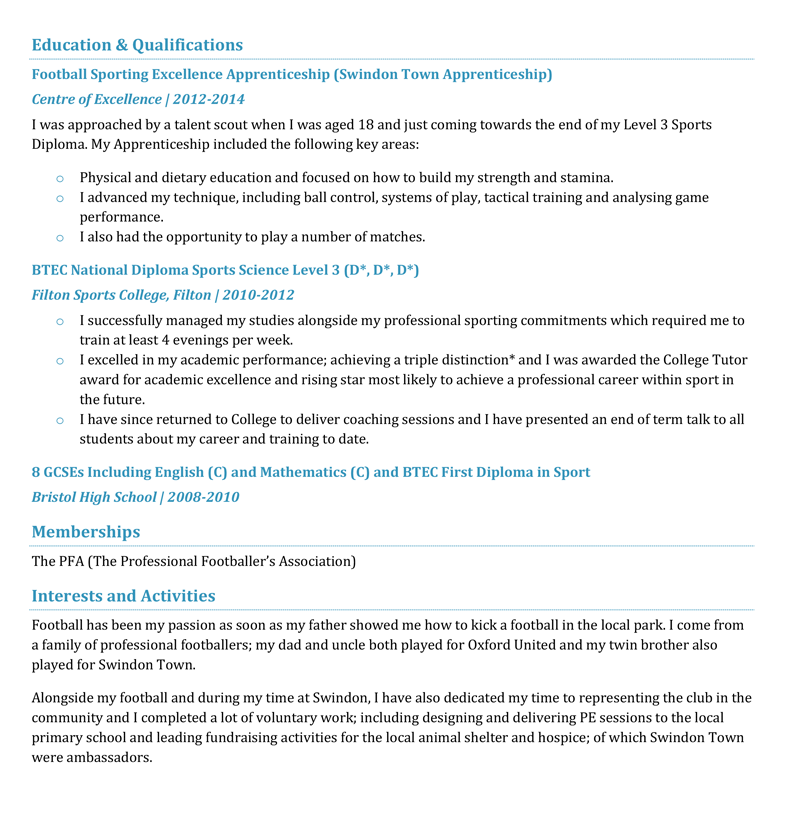 Other information to include on your footballer CV

In addition to the content in our suggested template, there is a range of other information that you can include on your footballer CV. For example:

Although typically you wouldn’t include your age on your CV for a normal job, it’s more expected in football. Age discrimination may be permitted so far as it is “a proportionate means of achieving a legitimate aim”. Generally speaking, as players get older, they do not have the ‘legs’ to play as many games in a season, and they are more likely to pick up a career-threatening injury or at least to take longer to recover. But this isn’t always the case, and clubs must treat every case individually, rather than applying a blanket rule.

Stats such as your sprint speed, vertical jump and pro-agility test score can help provide evidence to coaches of your abilities.

You can also include number of appearances for each club, goals and assists. Again, this provides prospective coaches with hard evidence of what you can do.

Although you don’t have to include references on your football CV (as coaches will ask for them anyway if they’re interested in you), you might want to add them to strengthen your CV. The prospect of a reference from a respected coach, manager or agent can add value to your CV.

NB: This CV template was originally published 11th February 2016 and has been updated for 2021.